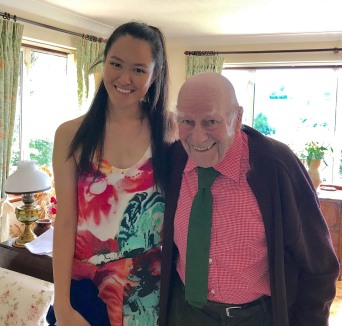 The young Japanese guitarist Saki Kato will be premièring the latest commission of The Julian Bream Trust, Streams and Variations by the British composer Edward Cowie on Thursday 21 November 2019 at Wigmore Hall, London. 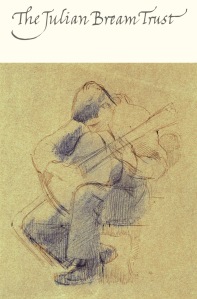 Julian Bream established The Julian Bream Trust in 2008 to continue his legacy of expanding the contemporary classical guitar repertoire by commissioning composers to write solo guitar works but is now choosing young performers to première them. So far, he has also commissioned: Sonata No 5: Ars Combinatoria (2013) from Leo Brouwer and Construction with Guitar Player: Beyond the White Hand (2013) from Sir Harrison Birtwistle, both of which were premièred by Andrey Lebedev on 4 December 2014 at St John’s, Smith Square, London; Catalan Peasant with Guitar (2015) by Julian Anderson, which was premièred by Laura Snowden on Saturday 21 November 2015 at Wigmore Hall; and Sonata No. 2 for solo guitar (2017) by Ollie Mustonen, which was premièred by Laura Snowden on 21 November 2017 at Wigmore Hall, London.

About the latest commission, Stream and Variations, the composer Edward Cowie writes:

Nature has been at the centre and gravity-point for my musical imagination for more than four decades. Music-alone has never been enough of a challenge to my ideas about form and sound. It’s certainly true that parallel student-studies in physics and fine art have left me with a firm conviction that ‘all things connect’. …

The River Sem (in places more a large stream really) runs through the county of Wiltshire close to where Julian Bream lived, worked, played cricket and walked his dog! An early meeting with Julian to talk about this piece revealed (no surprise really!) his deep interest in form. …

Thus the piece is cast in 8 sections (variations/variants) in the form of pool and ‘run’. There are four of each in this piece that lasts for about 22 minutes. What I’d like a listener to do is to allow the music and the instrument to carry them along the stream: beside-it or even ON it! None of my music is mono-sensual. I saw these sounds as well as heard them. I hope the audience can too. In spite of sometimes daunting technical issues (to an amateur like me with the instrument), I’ve been able to draw on the experience of earlier guitar pieces but much more on the patient and creative intelligence and technical skills of Saki Kato who is to premiere this work. I owe her an enormous debt of gratitude for all the part-shaping she has helped me to do. But in the end (and the beginning), it’s the music that is preeminent and most salient. Julian Bream is justly famous for creating and challenging new horizons and opportunities for composers to write for the guitar. I salute and thank him for allowing me to make this ‘stream of sound and ideas’ come to life…..

Saki Kato has been studying with Julian Bream for the past two years. I spoke to her about her lessons in an interview to be published in the December 2019 issue of Gendai Guitar magazine.

He doesn’t push you to play in his style; and it is very important not to do that – to force your style onto your students. He is very determined, though, and if the playing is horrible, he just says so. Or he will tell you if you are playing in a boring manner, but he is absolutely right. Straight away, I always agreed with him. The main thing is that he actually cares. He listens to you playing very patiently. Then, he would spend half an hour or whatever was needed, listening to me until, eventually, I would get it right. So that was a great privilege for me.

Saki Kato is only 22 years of age and is presently in the final year of her undergraduate degree at the Royal Academy of Music, London. From a young age, she began studying the guitar with Muraji, the father of the renowned classical guitarist Kaori Muraji. Saki Kato won First Prize in the GFA Junior Competition in 2008, when she was eleven years old and soon after gave her first performance of the Concerto de Aranjuez by Joaquín Rodrigo with orchestra.

For tickets to The Julian Bream Trust Concert, performed by Saki Kato on Thursday 21 November 2019 at 7.30pm: Wigmore Hall.