HAPPY BIRTHDAY to the wonderfully inspiring OLGA PIERRI, who celebrated her 101st birthday on Wednesday 3 June 2015!!

We hear that she celebrated her birthday in her usual style in Montevideo, surrounded by her friends, colleagues, students and family. Her nephew, the classical guitarist, Alvaro Pierri reports that: ‘of course, she is still living alone, refusing any help whatsoever; she is practising the guitar every morning for two to three hours, and then teaching in the afternoons and the evenings with passion.’ 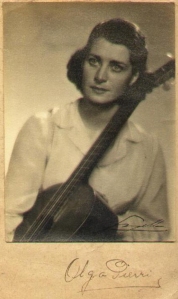 Today the name Pierri is internationally known for Olga’s nephew, Alvaro Pierri, but it is Olga’s tireless work as a performer and teacher, which first brought the name Pierri to international attention. In 1937 Olga Pierri played at the inaugural concert of the Centro Guitarrístico del Uruguay, playing in duo with Atilio Rapat; they shared the stage with the Carlevaro brothers – Abel and Agustín Carlevaro, among others. Olga Pierri and her two brothers Sergio and Ivan (the father of Alvaro), were born into a musical family of Italian decent. Their father, José Pierri Sapere, wrote many pieces of music. 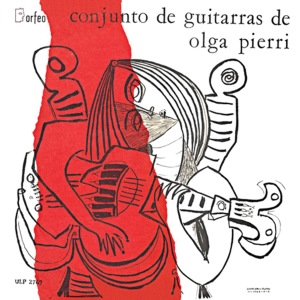 Olga Pierri regularly performed live on radio both as a soloist and in the ensemble which she formed with her best students, known as the ‘Conjunto Femenina de Guitarras’, as she explained to me: ‘In 1949 I had a radio programme which was broadcast once a week for one full year. I played with my ensemble and I also played classical works as a soloist. It was a very well-rounded programme and it was the programme with the largest audience at that time. It was broadcast on Wednesday evenings on Radio Difusoras Ariel.’

There were recordings as well, such this beautifully illustrated recording with Orfeo and any questions about the guitars which she has played over the years, inevitably leads to detailed stories. Equally so with regard to composers, such as Guido Santórsola.

For more detailed information of the importance of Montevideo and the Uruguayan guitar scene on the history of the classical guitar, I highly recommend Alfredo Escande’s, Don Andrés y Paquita – La vida de Segovia en Montevideo, 3rd edn, (2009), which is also available in English under the title: Don Andres and Paquita: The Life of Segovia in Montevideo. For Japanese readers, please see the monthly classical guitar magazine, Gendai Guitar, where it is being translated and serialised.