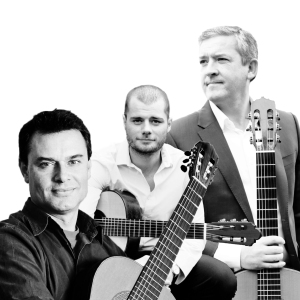 MORGAN BUCKLEY began commissioning works for the classical guitar as part of his research project on the collaborative relationship between composers and performers during the process of composition.**

At this Purcell Room recital on Wednesday 15 July 2015, we will hear the premières of some of these works: Gary Ryan has been working with Edwin Roxburgh on his fifth Soliloquy (the first four of his Soliloquys have been written for solo bowed instruments), Craig Ogden has been working with David Knotts on Grimm Tales, a work inspired by the stories of Brothers Grimm and Morgan Buckley has been working on With the Ideal Comes the Actual by the young composer Kate Honey, which is based on some Buddhist writings from the eighth century.

Kate Honey says that her three-movement With the Ideal Comes the Actual ‘is structured as an interior monologue, or contemplative rhapsody.’ Edwin Roxburgh and David Knotts have not written for the solo guitar before.

Edwin Roxburgh: ‘A soliloquy in Shakespeare allows the audience to observe the inner nature of the character involved. Applying the term to music allows the instrument to become the narrator, disclosing musical arguments which, in this work, expose many differing characteristics. In putting the guitar in this perspective I have tried to portray the instrument in as many guises as possible. The improvisatory character of the opening exposes a dramatic element in the argument, constantly interrupted by contrasting statements, which finally emerge into a sustained rhapsody.’

David Knotts’ Grimm Tales has six movements: I – Once upon a time (Without a care in the world); II – Lost in the forest; III – Chase!; IV – My Mother killed me, my Father ate me; V – Spin and VI – Betrothed.

David Knotts: ‘When a new complete edition of the original folk and fairy tales of the brothers Grimm was published last year, I was captivated by the ghoulish and macabre sensibility of the original tales which has so often sanitized and censored by past generations of translators and publishers. The stark and simple tale telling of Grimm’s originals inspired these 6 pieces.’

Gary Ryan will also be premièring his own composition Shamal at this concert.

Gary Ryan: ‘My initial ideas for the piece followed a visit to Riyadh in Saudi Arabia in November 2013. I had been invited to perform a solo recital as part of an event in the gardens of the British Embassy, the second half of which was to feature an extended improvisation with various Saudi musicians, including an oud player and several percussionists. […] I was reminded again of the Arabic influence on much Spanish music but it also struck me how the sound world we explored in the improvisation had echoes of many other different countries. I have tried to channel these different impressions into the piece using a wide variety of different techniques in combination with an altered tuning around the key centre of C.

The shamal is a hot, dry northerly wind which blows down from Turkey and Iraq over Saudi Arabia and the Persian Gulf states towards Pakistan, often triggering huge sandstorms.’

As well as these premières, the programme includes other contemporary guitar works: El llanto de los sueños (2015) by Stephen Goss, written for David Russell; Nightshade Rounds (1979) by Bruce MacCombie, written for Sharon Isbin; Canto (1968) by John McCabe, commissioned for the Cardiff Festival of Twentieth Century Music, and first performed by William Gomez; and Sonatina for guitar, Op. 52, No. 1 (1957) by Lennox Berkeley, dedicated to Julian Bream.

**In October of 2013, Morgan Buckley began his PhD at the Faculty of Music of Cambridge University. Under the supervision of Prof. Ian Cross and Dr John Hopkins, his research is investigating the composer–performer dialectic in new music for guitar, exploring the role of the performer as a creative agent in the collaborative compositional process.