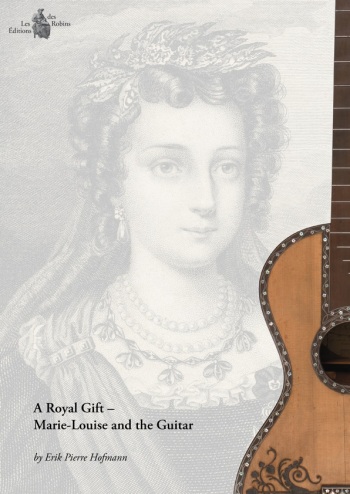 When Erik Pierre Hofmann, Pascal Mougin and Stefan Hackl published their comprehensive book Stauffer & Co.– The Viennese Guitar of the 19th Century, beautifully illustrated and written in three languages (French, English and German), although they knew of the existence of Marie-Louise’s Stauffer guitar, remarkably, they did not know its whereabouts or whether in fact it had survived.

The guitar by Johann Georg Stauffer was made in Vienna in 1810 and dedicated to “her Majesty Marie-Louise, Empress of the French and Queen of Italy, Archduchess of Austria”.

The story of the rediscovery of this instrument with a detailed description, including measurements, has now been provided by Erik Hofmann in an article ‘Un dono regale – Maria Luigia e la chitarra’ first published in the Italian guitar magazine Il Fronimo, in their issue no. 177, January 2017.

Erik Hoffman has translated that article into English – ‘A Royal Gift – Marie Louise and the Guitar’ – and made it available as a free download from here: A royal gift (© Les Editions des Robins 2017).

Here is a small sample from the article:

When, in the years 2009 to 2011, Stefan Hackl, Pascal Mougin and I composed the book Stauffer & Co. – The Viennese Guitar of the 19th Century, we came across an article published in 1810 in the periodical Der Sammler. The short yet surprisingly detailed report recounts the donation made by a local craftsman, Johann Georg Stauffer, to Marie-Louise of Austria (1791–1847), on the occasion of her wedding to Napoleon I. While the French Emperor through this political marriage consolidated his position as the most powerful man of his time, the gracious young woman, who was only 18 years old at the time of the wedding, resigned herself to her fate with admirable constraint. The gift made by Stauffer – simply one of the most extraordinary guitars ever made – not only reveals his patriotic devotion and business acumen, but also tells a story of the guitar in its time.